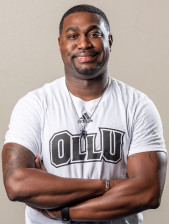 Younne A. Reid began his head coaching duties for men's and women's cross-country and track and field in July 2020. Reid comes to OLLU after 14 years at Southern University in New Orleans (SUNO).

Reid was the track and field assistant coach for 10 years and head coach for six years at SUNO. The university suspended its athletics programs after the 2019-2020 season. He also was an assistant coach of the highly competitive Racers Track Club in Jamaica. He has a successful track record for graduating student-athletes (97 percent), managing athletic programs, recruiting and developing talent on collegiate and professional levels.

Reid earned degrees in Physical Education and Sports and Foods and Nutrition from GC Foster College in Spanish Town, Jamaica. He also holds a bachelor's degree in Computer Information Systems from SUNO. He has a Certificate of Academic Excellence in the College of Business and Public Administration from SUNO. Reid is also certified Level I and II from USA Track and Field (USATF).

In addition to his coaching experience, Reid was the Director of Intramural Sports and Athletic Director at SUNO.

Reid's teams have also won several academic awards, including the NAIA Scholar Team award for both men and women.