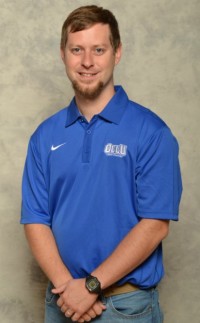 Stephen Sherman is in his fifth year at OLLU after coming from McMurry University in Abilene, Texas, where he served as assistant coach for cross-country and track for three years. The 2012 season was the best in the program's history. The Saints sent four participants to the NAIA National Cross-Country Championship meet that was held at the Fort Vancouver National Historic Site in Vancouver, Wash. This was the fifth consecutive time the cross-country team has sent participants to the National Championship meet -- each year since Sherman started the program in 2009. Last season, the team was represented in the national meet by four Saints: Laura Echeverria, Marianna Hurtado, Erica Ramos and David Duque. At the 2012 conference meet the women captured second place, while the men finished in fourth place. In 2011, the women's team finished in second place at the conference meet, which was up two spots from the 2009 and 2010 seasons. Miriam Vazquez qualified for the NAIA National Cross-Country Championships for the third consecutive year, and she was named to the RRAC All-Conference Team for the second consecutive year. Also, Alex De Luna missed qualifying for the NAIA National Cross-Country Meet and being named to the RRAC All-Conference Cross Country Team by one spot as she finished in 11th place at the RRAC Cross Country Meet. On the men's side, David Duque became OLLU's first male qualifyer to the NAIA National Cross-Country Championships. In 2011 and 2012, Duque also was named to the RRAC All-Conference team. Sherman earned his USA Track and Field (USATF) Level I Certification in June 2005 and USATF Level II Certification in Endurance Events in July 2008. A native of Dickinson, Texas, Sherman received a Bachelor of Arts in history and political science from McMurry and a Master of Science in organizational and human resources development from Abilene Christian University. Sherman is married to Megan Pate, and they reside in San Antonio.