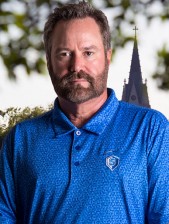 Alan E. Baxter has completed his fourth year as head coach for the golf team at Our Lady of the Lake University.

In the 2017 season, the Saints captured the Red River Athletic Conference (RRAC) Tournament Championship for the third straight year. The Saints tallied a two-day even 864 to capture the title. Christopher Schriedel was the individual champion after shooting an even 216. He was followed by Gerardo Daniel, Kane Ybarra and Stevan Hinojosa -- all four earned All-Conference honors. Ybarra was named the conference's Player of the Year as well as Freshman/Newcomer of the Year.

During Baxter's first year as coach for the Saints, the team played in seven tournaments -- three in the fall and four in the spring. The team hosted the Men's Golf Red River and Unaffiliated Athletic Conference Championship Tournament at the Olympia Hills Golf Course. The Saints finished fifth out of six teams.  Currently, Baxter is mayor of the City of Windcrest, a position he has held since 2011. In addition, he is CEO and President of DBGIC Management, LLC. and FAR Music, LLC. Here he negotiates contracts, promotes, markets, consults and manages recording artists, entertainers, models, actors, professional athletes, coaches, athletic and entertainment events, sponsorships and naming rights for facilities. 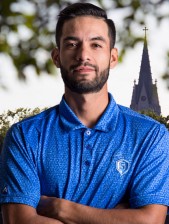