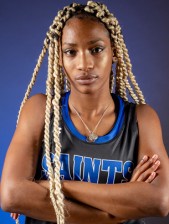 Favorite Motto: "Don't call it a comeback, it was dark, now the sun back."