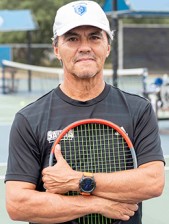 Sal Castillo enters his 12th season as head coach of the men's tennis team at OLLU.

The Saints made it to the NAIA Regional Championship once again after losing to Texas A&M University - Texarkana. Named to the All-Tournament Team were Ross Marzetti and Vinnie Oliveira in the first team and Diego Salinas, Abraham Cantu in the second team

In 2014-2015, the men enjoyed a 9-5-1 record. They qualified for the NAIA Regional Tournament where they lost to Oklahoma Baptist University in the championship match. In the Saints' first season, the team finished with an 0-5 record. In 2009-2010, the team improved to 5-13, and in 2010-2011, the Saints jumped to 8-6. During the 2011-2012 season, the Saints' record was 7-7, and in 2012-2013, they finished at 6-7, and they made it to the semifinals round of the NAIA Regional Championship Tournament. In 2013-2014, the men finished with a 5-7 record.  Before taking charge of the OLLU tennis teams, Castillo enjoyed an illustrious tennis career. Several of his achievements include: Finished in second place in the Austria Cup of the Senior World Championship; 2006-2007: Selected as player/captain United States Fred Perry Cup Team; Fred Perry Cup World Champions in 2006 and finalist in 2007; 2003-2005: Selected as captain of United States Leon Dubler Cup Team; 2000, 2004, 2005: Dubler Cup World Champions; 2001-2003: Ranked No. 1 in the United States by the USTA in Men's 45 and older singles; 2001-2002: Ranked No. 1 in the world by International Tennis Federation; Two time ITF World Champion in Men's 45 and older doubles; 2001: Professional Tennis Registry International Player of the Year; 1991, 1992, 1994, 1996: Selected as player of United States Italia Cup; 1993 and 1994: United States Professional Tennis Assoc. National Player of the Year; 1993: Played professional World Team Tennis for San Antonio Racquets; 1990: Featured in Sports Illustrated, Faces in the Crowd, for being the only player ever to win four national USTA doubles titles with four different partners on four different surfaces in the same year; Ranked No. 1 in the United States in singles and doubles in Men's 35, 40, and 45 and older age divisions during career; Earned over 50 national and international championships in singles and doubles; Coached privately at professional level for four years and also coached three college all-Americans including two-time NCAA Div II singles champion Rebecca Huereque and NJCAA singles and doubles champion Mike Castillo. In June 2015, Castillo, paired with Daniel Waldman, captured the men's double over-60 crown representing the USA at the ITF 25th Seniors World Individual Championships. The ITF Seniors World Individual Championships is a Grade A tournament featuring over 400 players from 37 countries competing in singles, doubles and mixed doubles. In July of 2015, Castillo along with OLLU Athletic Director Jack Hank captured the 60-64 age group tennis championship at the National Senior Games Tennis Tournament in Minneapolis. The National Senior Games is sponsored by the United States Tennis Association (USTA) -- the national governing body for the sport of tennis and the recognized leader in promoting and developing the sport's growth on every level in the United States, from local communities to the crown jewel of the professional game, the U.S. Open.