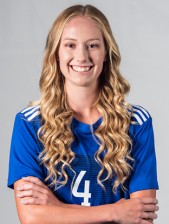 Hobbies: Hiking, playing guitar and hanging out with friends

Favorite Motto: "Do you know what my favorite part of the game is? It's the opportunity to play," Michael Singletary