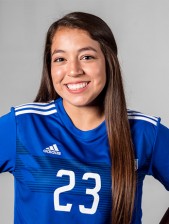 Favorite Motto: “The one who falls and gets up is so much stronger than the one who never fell.”