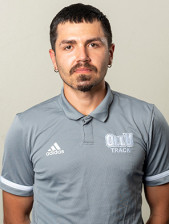 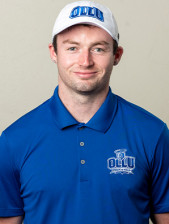 BRETT CHARLTON has completed his first season with the cross-country and track and field teams as assistant coach. Charlton comes to OLLU from Eureka High School in Eureka, Ill.

Charlton assists Head Coach Patrick Torres with both cross-country and track and field but will concentrate on working with sprinters and jumpers for the track team.

At Eureka High School, Charlton was an assistant coach for the men's track team from 2018-2020. His team was the state runner-up in the 4x400m relay with a time of 3:18m. He also coached the 2019 high jump state champion and New Balance National's runner.

He ran track and field and Illinois State University. He also played football and track and field at Eureka College from 2017-2019. He received the St. Louis Intercollegiate Athletic Conference All-Conference awards in 100m, 200m and long jump.

Charlton has a bachelor's degree in Special Education and an endorsement in coaching and kinesiology from Eureka College, an NCAA D3 school in Eureka, Ill.

Cody McDonnough has joined the staff of cross-country and track and field this spring 2021. McDonnough ran for the University of the Incarnate Word from 2011-2014, and he graduated with a degree in Kinesiology. He has coached individual athletes (high school and college) over the years. He currently teaches at John Marshall High School in San Antonio.