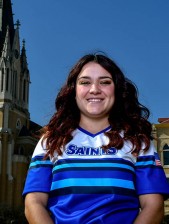 Hobbies: Working out, playing the piano, drawing, painting and hiking

Favorite Motto: "I can do all things through Christ who strengthens me." Philippians 4:13