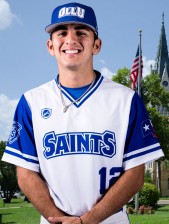 Favorite Motto: "I am cocky in prediction. I am confident in preparation, but I am always humble in victory or defeat."