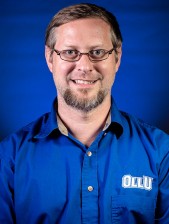 Stephen Sherman has completed his 10th season at OLLU after coming from McMurry University in Abilene, Texas, where he served as assistant coach for cross-country and track for three years.

In 2018, the men captured their fourth consecutive Red River Athletic Conference (RRAC) Championship title, and Sherman won his fourth men's coach of the year award. The team was led by individual medalist Nathaniel Aguilar, while Jose Zarate was third, Isaiah Ramirez was sixth and Derek Barnett was seventh. The team beat the University of St. Thomas by 12 points.

In 2017, the Saints won their third consecutive RRAC Championship, and Sherman won his third men's coach of the year award. The team was led by top medalist Andrew Moczygemba, while Nathaniel Aguilar (Second Place) and Patrick Bousselot (10th Place) joined Moczegemba for All-Conference honors. The men narrowly beat Wiley College with 36 points compared to 37 for the Wildcats.

In 2016, the team was led by Derek Barnett, who placed fourth overall. He was followed by Patrick Torres in fifth place, Luis Ramirez in sixth place, Nathaniel Aguilar in ninth place and Patrick Bousselot in 10th place.

Sherman's 2016 team tallied 34 points, and Wiley College finished second with 46 points, followed by the University of the Southwest with 75, LSU-Shreveport with 105 points, Jarvis Christian College with 107 points and Huston-Tillotson University with 157 points

The Saints won their first-ever RRAC Championship in 2015. The team was led by Samuel Bonilla, who placed fourth overall with a time of 27:52. He was followed by Nathaniel Aguilar in fifth place with a time of 28:00. Patrick Bousselot came in sixth place with a time of 28:02, and 18 seconds later, Emilio Marquez finished in ninth place with a time of 28:20. All four received RRAC All-Conference honors. Anthony Gonzalez finished in 12th place with a time of 28:39. Tristen Robles came in 13th with a time of 28:45, and Justin Ybarra finished in 18th place with a time of 31:21.  Sherman's team tallied 36 points, and Wiley College finished second with 78 points, followed by the University of the Southwest with 86 and Gulf Coast Athletic Conference member Xavier University with 123 points. Langston scored 123 points, with Dillard University close by at 125 points. Huston-Tillotson University came in seventh with 144 points, trailed by LSU-Shreveport with 169 points. In 2014, Gabriel Ellman and Jonathan Yanez qualified for the NAIA National Cross-Country Championship meet after Ellman finished fifth and Yanez sixth in the 8k at the RRAC meet. The two, along with Luis Garza, received All-Conference honors. As a team, the Saints finished second to Wiley College. In 2013, the Saints sent Jonathan Yanez to the NAIA National Cross-Country Championship meet after he finished in second place in the RRAC meet. As a team, the Saints placed third. The Saints have participated in the National Championship meet each year since Sherman started the program in 2009. In the 2012 season, the Saints sent David Duque to the national meet that was held at the Fort Vancouver National Historic Site in Vancouver, Wash. Duque became OLLU's first male qualifier to the NAIA National Cross-Country Championships. Sherman earned his USA Track and Field (USATF) Level I Certification in June 2005 and USATF Level II Certification in Endurance Events in July 2008. A native of Dickinson, Texas, Sherman received a Bachelor of Arts in history and political science from McMurry and a Master of Science in organizational and human resources development from Abilene Christian University. Sherman and his wife Megan Pate are parents to a boy and a girl. 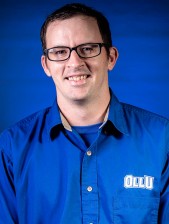